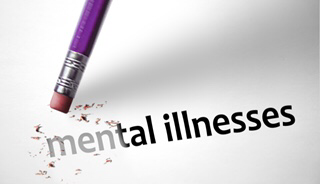 It should be of no surprise to any of my readers that their has recently been a greater awareness of the misuse of words and how hurtful they can actually be.  Spread the Word to End the Word is a campaign that started to raise awareness of the harm the word “retarded” has when used inappropriately.  Many have joined in this campaign and I think there have been great results, though I’m sure there is still much more to be done.  So how many more words are misused today? Well, probably more than I’m even aware.  Today I just want to bring to light a few specific words that I have been hurt by.  I also know countless others who have seen negative consequences by the misuse of these words.

Mental Illness for a long time has been a taboo subject. There are still beliefs that these are not actual physical illnesses.  There is so much scientific evidence now that to not believe that mental illness is real is complete ignorance.  With that and stigma, many don’t even no where to begin when talking about mental illness or even what it means.  So today I will be talking about: depression and bipolar disorder (manic-depression). and most comment abused words. Note: Though anxiety disorder is well known and commonly diagnosed, it is less likely people misuse the term anxious as people can have anxiety without having an anxiety disorder.  This doesn’t mean the term is never misused, but it is just less common.

So to start, Major Depressive Disorder is of the most severe of the  depressive disorders excluding Cronic Depressive disorder.  Major depressive disorder is what most people think of when they hear the word “depression”. Symptoms may include fatigue, persistent sadness, isolation, thoughts of suicide, etc.  So when is the word depression misused and potentially harmful? Well, that’s a hard one.  For starts, if someone ever says that they are depressed, never assume they are not until it’s proven that they are.  That’s why people fear speaking up.  I find it hard to discredit someone who uses the word depressed when in reality they are just extremely sad.  Depression is more long term, but that doesn’t invalidate the way someone feels.  If they feel extremely sad, they are allowed to say they are depressed.  I believe it is misused when others from an outside party are doing the labeling for the wrong reasons.  With intentions to bully, you can hear remarks from people about others being depressed if they are dressed in dark, listen to certain music, or act a certain way.  The person they call depressed may actually be depressed but the way they present the word is in a negative context. An example would be a co-worker cries all the time.  Another co working laughingly jokes that they are depressed and need medication.  They say  they should suck it up.  This is inappropriate.  If you genuinely believe someone might be depressed, talk to them. Befriend them and see how you can help.  By showing the depression doesn’t have a ‘look’, maybe more people will actually be able to recognize the signs of depression even when the person in question “seems happy”.

The next term is the one I get the most upset about.  Bipolar disorder is an awful illness that many struggle with around the world.  The misuse of this term often turns the illness into a joke and not a deadly disease.  I think the root of the misuse of this term is that of ignorance.  Many people who use it, have no idea what Bipolar disorder actually is.  I’ve heard people call others bipolar if they change their mind often, get happy then sad quickly, or are flakey.  This is not what Bipolar is.  Someone who is bipolar goes through extremes.  The two extremes are periods of deep depression and periods of mania (or hypermania). People know what depression is for the most part but I think mania is what people have confused.  It is often assumed that bipolar is extreme saddness (depression) and extremely happiness. This is not necessarily the case.  I would never describe my bouts of hypermania as happy.  Speaking from my own experience, mania is being so worked up that you experience a state of euphoria.  You don’t feel like you are in control of your body.  You feel like you were drugged. In manic states people often make very poor decisions because they can’t think of the consequences.  As if you have been drugged.  There is nothing happy about it.  So before you call your friend bipolar for changing his mind about wanting to hang out, remember that people who actually struggle with this disorder have a hard time with everyday life. It’s a deadly disease and should be taken seriously by all.

My final thoughts take me back to my months spent in the mental hospital.  Don’t think of that place as an insane asylum because that is such an inaccurate picture.  Movies do such a poor job portraying what it’s actually like.  So before jokinging telling someone they should go to a mental hospital, remember the many people who are living there to heal, better themselves, and overcome their illness.  I’m not ashamed to say I have lived there and I hate the stigma behind the fact that I have.

So there you have it. I could say much more but will leave it here.  Comment any terms you think are used incorrectly!